We use cookies to ensure that we give you the best experience on our website. If you continue, we'll assume that you understand this. Learn more
Accept
Skip to content
Our new flavor is a work of evil genius. We dare you to try it!
Become a subscriber and receive 15% off + free shipping! Subscribe Today
$3.99 flat rate shipping • Free shipping on orders $50+ (Cont. US)

What Is Root Beer Made of and How Is OLIPOP Different?

Root beer is an American classic with a rich (and creamy!) history. Unfortunately, like other major soda flavors, Root Beer is traditionally rich in added sugars and artificial ingredients. But…. we aren’t just bearers of bad news! What if we told you there’s a new Root Beer in town that has the rich, sweet, and creamy flavor you know and love but is actually being good for you? Yup, that’s right, we’re talking about OLIPOP’s Classic Root Beer.


So, let’s dive into Root Beer’s history and take a look inside the can! We'll compare OLIPOP’s blend of unique botanicals, plant fibers, and prebiotics to the not-so-great-for-you ingredients you’ll find in your average can of Root Beer so you can start deciding which soda is right for you!

So where does the story of Root Beer begin? While Philadelphia pharmacist Charles Elmer Hires is credited with selling the first-ever version of Root Beer, the story really starts with a little root called sassafras1.

Sassafras is a genus of three different types of trees found across North America and parts of East Asia. The sassafras tree is incredibly fragrant and its roots are the backbone of Root Beer's original flavor.


Before the sassafras root made its way into traditional root beer, it first gained popularity for its medicinal properties. There is evidence that, back in pre-colonial times, indigenous tribes used the sassafras root in cooking and to help treat wounds 1 2.


Seeing indigenous tribes use the roots, American colonists picked up on its helpful properties and began using it as an ingredient in early “small beers” or beverages created from whatever roots and herbs they had at their disposal1. With ingredients like licorice root, birch bark, hops, ginger, mint, nutmeg, and sassafras root, so began early versions of traditional small beers such as birch beer, sarsaparilla, ginger beer, and root beer1.

It wasn’t until the 1860s that the Root Beer we now know today made its first appearance in American culture1. Ironically, this is thanks to an accidental discovery made by pharmacist Charles Elmer Hires3.


Hires was attempting to make a cure-all miracle drug featuring ingredients such as: sarsaparilla, hops, juniper, wintergreen, spikenard, licorice, vanilla, and birch bark3. This original recipe was a sweet and bitter syrup that initially wasn’t well-received3.

However, after going back to the drawing board and making some recipe changes, Hires debuted his version of Root Beer to the public in 18761. By 1893 the first bottled root beer was being sold and distributed1. After Hires’ first success, other companies started making their own versions of root beer and the soda quickly became a household favorite.

As you might imagine, the Root Beer you purchase from the grocery store today looks a little bit different than it did back in the late 1800s. For starters, the U.S. Food and Drug Administration (FDA) banned the use of sassafras in 1960 due to studies pointing to its potential carcinogenic, or cancer-causing, effects2. However, recent research has shed some doubt on this ban, failing to find any evidence that the carcinogenic effects we’ve seen in rats apply to humans2.


Additionally, while early versions of Root Beer were alcoholic, today’s Root Beer is often a kid-favorite thanks to its zero alcohol content. Also, at some point in Root Beer’s history, makers began swapping out Root Beer’s natural roots and herbs for ingredients like high fructose corn syrup.

All of these changes make modern Root Beer another sugar-sweetened beverage with zero health benefits; which, ironically, is quite the opposite of Charles Elmer Hires original vision for a cure-all medicine!

A 12oz can of the most popular Root Beer brands today has anywhere from 43 to 45 grams of added sugar, contains 160 to 230 calories, and has 0 grams of dietary fiber or protein.


A can of Root Beer, for example, has 43 to 45 grams of added sugar from high fructose corn syrup. Which is an incredible amount of added sugar! In fact, the American Heart Association suggests you limit your added sugars to no more than 24 grams for women and 36 grams for men per day5. In just one can of Root Beer you are consuming well and above your daily limit according to this agency. Now add in the high fructose corn syrup that’s in your cereal, baked goods, and processed foods and you’ve got yourself a corn-syrup related sugar problem.

Caramel color is a food coloring added to many sodas to create that familiar dark coloring6. It’s made with ammonium compounds, which can, in the manufacturing process, form a chemical compound called 4-methylimidazole (4-MEI)6.


4-MEI is a contentious topic that is highly debated. While a study from 2007 by the International Agency for Research on Cancer found the compound to be potentially carcinogenic to humans, a 2020 report by the FDA argued that small amounts of the compound are safe for human consumption7 8.

Another unnatural ingredient in soda, sodium benzoate is an FDA-approved chemical preservative used by manufacturers to extend a product’s shelf life and increase the freshness of your soda9. Alongside other common preservatives like potassium benzoate and potassium sorbate, a small amount in your Root Beer can help protect your drink from mold, yeast, and unwanted bacteria9.


Although generally recognized as safe by the FDA, sodium benzoate can form benzene, a known carcinogen, when combined with ascorbic acid, or Vitamin C10.

Citric acid is an acid naturally found in citrus fruits such as lemons, limes, oranges, grapefruits, and some berries11. It’s one of the world’s most common food additives because it works as both a preservative and flavoring agent11.

However, the citric acid you’ll find in your Root Beer is the lab-created or artificial version of the acid, which means it doesn’t offer the same benefits as you’d get biting into an orange. Even so, this FDA-approved man-made citric acid helps keep your root beer fresh and gives it a tangy flavor11.

In direct contrast to other brands, OLIPOP's Classic Root Beer combines the rich, sweet, and creamy flavor you know and love with the complex nutrients you need. While other root beers lack any kind of nutritional value, our Classic Root Beer is made with only well-studied and beneficial ingredients with prebiotics, plant fibers, and botanicals for a gut boost that feels as good as it tastes (and it tastes really, really good).


With these ingredients, our Classic Root Beer redefines the meaning of classic by bringing root beer back to its roots (see what we did there?). Our botanically driven Root Beer uses extracts of sweet birch, smooth-vanilla bean, naturally sourced burdock root, chicory root, cassava root, and more.


And of course, this isn’t your average 44-grams-of-sugar-per-can root beer. Instead, OLIPOP’s Classic Root Beer has 35 calories, nine grams of dietary fiber, and just two grams of sugar from cassava root syrup, real fruit juice, and stevia. Our plant-based ingredients are the ultimate dream team and work together to support healthy digestion and feed the microbiome that exists within all of us.

The ingredients in your can of OLIPOP Classic Root Beer include:

OLISMART is our in-house proprietary blend of eight unique botanicals, plant fibers, and prebiotics, each hand-picked for their biome-supporting benefits. For more information on each of these power-packed ingredients, check out our ultimate guides below:

Cassava root syrup is an all-natural and fructose-free sugar alternative made from the cassava root, a woody shrub with fan-shaped leaves that’s native to South America. This syrup extract is added to drinks (like OLIPOP!) and snacks where it acts as a prebiotic fiber and sugar-free sweetener.

Burdock root is a plant native to North Asia and Europe but also grows today as a weed across the United States. This root vegetable has been a part of traditional medicine for centuries, given its potential for many health benefits such as lowering blood sugar levels and helping to treat and prevent infections12.

Stevia is a zero-calorie, plant-based sweetener derived from the South American plant “Stevia Rebaudiana”. Not only does it not have any calories, carbs, or fat, but it's approximately 200-300 times sweeter tasting than sugar, meaning you need a lot less of it to get that delicious sweet taste13.

To learn more about stevia leaf extract and how it’s different from sugar check out our blog posts The Ultimate Guide to Stevia and Debunking Myths About Stevia.

Sweet Birch (also called black birch and cherry birch) is a tree native to eastern North America14. Just like the maple tree, it produces a sweet sap. You can also harvest its stem and bark to extract wintergreen, a natural flavoring agent with a minty taste.

Whether you’re on the hunt for a really good treat, or you’re looking for some digestive support, OLIPOP Classic Root Beer has you covered.


Our fun, fizzy take on this American classic is filled with prebiotics, fiber, and botanical extracts to support your gut health. Plus it contains no artificial preservatives, sweeteners, colors, flavors or ingredients, and it is non-GMO, vegan, gluten-free, paleo, and keto-friendly.


Stock your fridge with Classic Root Beer (or our other amazing flavors!) and get ready to swap out sugar for better health benefits! 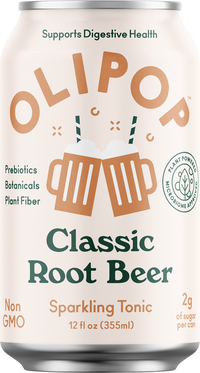 Food and Soda Pairings: What to Eat With OLIPOP

What makes a good soda and food pairing? Find out as we share how you can reward your taste buds with these OLIPOP and food matches made in heaven.

For Mental Health Awareness month, we ran a "Trust Your Gut" meditation series on our Instagram Live every Monday in May. If you missed out on these incredible sessions, we have collected them in o...