Allow us to re-introduce you to that classic orange soda taste you know and love with our delicious Orange Squeeze soda. Our version reinvents orange soda with a citrusy blend of natural ingredients that’s enhanced with 160% of your daily value of immune-supporting vitamin C. Clementine and mandarin juices collide with a hint of lemon to produce a bright twist on the nostalgic classic. Can you say one Orange Squeeze, please?

Ben Goodwin, our co-founder, and formulator loved orange soda and drank it regularly as a child. After taking control of his diet as a teenager, he cut the delicious orange drink from his diet for good. So when Ben began formulating sodas in the OLIPOP fashion, it was a no-brainer to return to his childhood roots and give his once-beloved drink a makeover.


So, he went to work so that OLIPOP's version of the flavor would be better than he remembered and better for you. Ben dissected and studied the sugary soda for a long time. He analyzed its many flavors and broke down its flavor architecture so that he could rebuild it without artificial ingredients. Of course, this was not an easy feat and took many trials and errors; so much so, he went through fourteen citrus varieties to obtain the perfect combination. But his hard work was not in vain, because now we have Orange Squeeze!

In addition to the OLISMART blend we use in our sodas which include three different probiotics that feed the gut microbiome (chicory root, Jerusalem artichoke, and cassava fiber), Orange Squeeze has an additional benefit: Vitamin C. The vitamin is involved in many body functions but is best known for its immune system support. Our Orange Squeeze combines clementine and mandarin with rosehips and acerola cherry to provide you with a whopping 160% of your daily Vitamin C!

Food and drink pairings are not limited to alcohol. Like a good cheese and wine pairing, beverages like soda can completely enhance a meal and take it to a whole new level. And while Orange Squeeze is perfect for drinking alone, it happens to make a great addition to pretty much any meal. There are some particular food and beverage combinations out there that sometimes make you think they were created specifically to be consumed together. And these combinations are a few of those made-to-be pairs!

From rotisseried to grilled to stewed, our nations' most popular protein is chicken, and for a good reason. It's versatile, omnipresent, and lucky for us, an ice-cold pop can complement nearly every type of chicken dish.


But chicken wings and Orange Squeeze, in particular, are a mighty taste-buds pleasing match you might not have seen coming. Not only is orange soda occasionally used to flavor chicken wings but also it washes down the spices and bold flavors of chicken wings perfectly.

Thanks to its bright and citrusy flavor, Orange Squeeze matches the mighty and tasty flavors, like tomato, lime, and peppers, found in Mexican cuisine.

Cut through the sweet, savory barbecue sauce with Orange Squeeze's hint of fizz and delicious citrus flavor. It's the ultimate way to get your taste buds refreshed and excited for your next big bite!

Orange Squeeze happens to be our very own Senior Director of Sales, Abby Redick's favorite flavor. She says, "It reminds me of the Fresca I used to ‘sneak-drink’ at my friend's house growing up. Except now I get the same citrus yum without the aspartame and artificial flavors. I don't have to ‘sneak-drink’ anymore!"


"Unlike any orange pop I've ever had. There isn't the fake orange flavor that other orange sodas have. This is one delicious can of pop!" - Douglad H.


"I love Orange Squeeze Olipop - who am I kidding, I love them ALL! But the fact that the Orange has vitamin C in it puts it above the others in my mind. I will just be adding a case of Orange to my subscription!" - Tiffany D.


"I LITERALLY LOVE OLIPOP EVEN MORE NOW. I've been a big fan of the prebiotic gut-health goodness for a while. But Orange Squeeze did me in. I can't live without my OS subscription. And now I hear that it is totally okay to have it with my breakfast. Now that's a soda I can get behind. And my kids too! Thank you! 5 Million Stars." - Rachel S.

Where to purchase Orange Squeeze

Man, those reviews did their job, didn't they?! Here's the sitch on how to purchase Orange Squeeze. You can either buy directly from us, and we'll send your cans straight to your front door. And if you happen to really love it (which we think you will), you should look into our subscription program so that you can get it delivered regularly while saving money. Win-win. And when you’re on your next in-store grocery trip, you can look for OLIPOP in the refrigerated beverage aisle—use our nifty search by flavor feature on our store locator to find it in a store near you. Happy sipping! 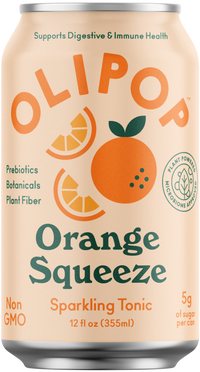